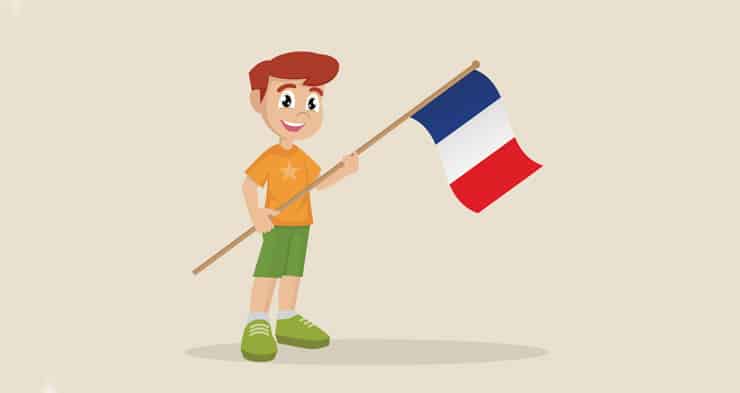 Like their arts, culture, sights, cuisine, fashion, and language, French names’ beauty has a global appeal. Before three decades ago, French names were predominantly saint names. However, the French language possesses some uniqueness. You will always get a French version of an English word like the name Andre is the French variant of English Andrew. Simultaneously every traditional masculine name has a feminine form, e.g., Adrienne is the feminine variation of the masculine Adrien.

2. Adam
Adam is a biblical name that means from the soil.

3. Adrien
Adrian is the French variation of the Latin name Adrianus. It symbolizes someone born with a dark hair tone among light-haired people.

4. Alain
Alain means handsome. If your prince’s facial grace makes you name him on something attractive, Alain will be the ideal choice.

5. Alexius
A variant of Alexandre, Alexium represents a defender of men.

8. Augustine
Augustine is the French variant of the Latin word Augustinus which means experienced and wise.

10. Baptiste
Religious parents may love to name their child on saint Jean de Baptist. Baptiste means to dip in the water.

11. Benoit
Benoit is an old French word that means blessed. The other French variety of this name is Benedicte which came from the Latin word Benedictus.

12. Blaise
A vintage name with a fresh sound, Blaise signifies someone who stumbles. Another meaning of Blaise is gleam.

13. Boyce
Boyce is a cool French baby boy name that means residing close to the woods.

14. Clement
Do you want to grow a kind and compassionate persona within your boy? Shape him with this name which means someone who is merciful and warm-hearted.

16. Colyn
Colyn is the French form of the Irish, Scottish, and Gaelic name Colin. It symbolizes a young creature.

17. Corentin
A cute rare name for boys that means a storm.

18. Didier
It is a popular name in France and French-speaking countries. Didier means loved and desired.

19. Elias
Elias is the one who believes Yahweh is his Lord.

20. Eliott
Eliott means one who is loving and caring, which are admirable virtues.

22. Ethan
The name Ethan is a Hebrew-originated word that means strong and firm.

23. Etienne
A French classical name that is still loved by many. It refers to a crown, wreath, or garland.

25. Florian
A masculine French name shared with many other nationalities, and it means to flourish.

26. Gabin
Secured at the top 20 baby boy names in France, this name indicates someone from Gabii, a place in Italy.

27. Gabriel
According to the Bible, Gabriel is an angel. It means God is my strength.

28. Gais
It is a delightful traditional French name for boys. Gais symbolizes someone joyful, pleasant, and cheerful.

30. Gustave
A decent masculine name starting with the letter G, and this name signifies the one who works for the royals.

33. Harvey
Harvey indicates someone worthy of the battlefield, a warrior, someone ardent.

34. Henri
Are you looking for baby boy names linked with leadership? Go for Henri; it signifies a ruler.

35. Horace
Horace is a poetic baby boy name, a French variation of Horatius that means harvesting by cutting.

36. Hugo
Hugo means intelligence. It is among the top 10 baby boy names in Europe.

38. Iven
Brief and beautiful, it is an ocean-inspired name that means a little archer.

40. Janvier
The name Janvier is of French origin that signifies the month ’January”. Janvier is a popular male name in France.

41. Joseph
For parents who would like to associate their baby boys with strong biblical characters, Joseph is ideal for them. It means God will multiply.

42. Jovan
Jovan is the modern version of the Greek word Yovan and the Hebrew word Yohanan. Jovan symbolizes a noble person.

43. Jules
The name Jules denotes a youthful, soft fellow. This name is the French form of the Latin name Julius.

45. Laurent
It is a stylish middle or last name, famous in every French-spoken country. It means hailing from Laurentum. Another meaning is the bright one, who achieved something commendable.

46. Leo
Though Leo is a Latin word that means lion, it is a popular name in English, American, and French households.

47. Lothair
A royal, as well as a rare name, Lothair, indicates a famous warrior.

48. Louis
Louis denotes a person who is famous in battle. It is the French variety of the Old Frankish word Lewis.

49. Liam
The name Liam has several meanings. Liam signifies desire, a helmet, a guardian, and a boss.

52. Matheu
It is a Hebrew-originated word. The name Mathew signifies a gift from God.

53. Mallon
It is an Old English word that means little strong warrior.

54. Marquis
It is a sophisticated name that denotes a noble person. Marquis means from Lord of the borderlands.

55. Martin
Martin indicates a military person or a person from Mars. This name is commonly associated with Saint Martin, an influential figure in the history of France.

58. Mauger
Mauger is a traditional french name that symbolizes a spear.

59. Maxime
A diminutive of the Latin word Maximus, Maxime means the greatest among all.

61. Michael
Masculine names that end with -el suffix have a distinctive charm. The name Michael has no difference. It is a biblical name of an archangel.

62. Nelle
Every parent thinks their child is unique. If you want to name your son on something that represents uniqueness, then Nelle will be ideal. It means extraordinary.

64. Nolan
It is a stylish baby boy name that has its charm. Nolan means charm.

65. Norris
Norris is Old french that indicates someone from the north. Another meaning of Norris is a caregiver.

68. Paul
If you prefer a biblical baby boy name that signifies humility, Paul is the right choice. This name arrived from the Roman surname, Paulus or Paullus.

70. Philippe
A cute name with an adorable nickname Phil, Philippe, denotes one who adores horses.

71. Quincy
Quincy is a unisex baby name that means fifth son’s house or property. It is an old French-originated word.

72. Quentin
If the newborn is your fifth child, Quentin will be the perfect name for him. It means fifth, and it is a diminutive form of the Latin name Quintus.

73. Raymond
It is a sensible name that represents a wise counselor. Adorned as Reimund in Old French dialect, Raymond is the modern variation.

74. Raphael
Raphel is a holy baby name that has been trending among the top 100 baby names for several years. It means God is a healer. It is also the name of the biblical archangel.

75. Remy
Remy is a trendy sea-inspired unisex baby name that refers to an oarsman.

77. Romain
Romain is a perfect French name for baby boys with Italian roots. This word refers to a person from Rome.

78. Sebastian
The meaning of Sebastian is an experienced person.

79. Sacha
Sacha is an original French word that represents a defending soldier.

81. Spencer
For some classic sophistication, try the name Spencer which refers to the occupation of an administrator.

82. Stephan
Masculine names that end with -an suffix are truly melodious, and so is Stephan. It means honor or crown.

84. Theodore
Brief but with a profound meaning, This name signifies the blessing of the almighty. The word ‘Theo’ is a short form or nickname of Theodore.

85. Thierry
If you are a fan of French footballer Thierry Henry, you will adore this name. It is a French masculine name derived from the Germanic word “Theodoric,” which means the people’s ruler.

86. Timeo
It has been trending among the top 100 baby names for French boys for a long. Timeo means honoring God. It is a variation of Timothee and can be the perfect French first name for your son.

87. Tristan
Tristan is a bold name that represents a metallic noise or outcry. It also means a legendary brave person.

88. Tyce
Tyce is a modern name which is also a nickname for the old classic French name Tyson. It indicates someone with high spirits and fiery nature.

89. Ubert
Ubert means intelligent. If you believe that a meaningful name impacts the baby’s life and wants your son to grow up as a clever and sharp gentleman, Ubert is the right choice.

90. Urien
Urien is a long-established name yet sounds lavish. It indicates someone who possesses a rich inheritance.

92. Vail
It is a unique name, starting with the letter Vail means a valley.

95. Xander
A cute and attractive diminutive of the name Alexander, Xander means defender of men.

96. Xavier
Names beginning with X are rare and forever exceptional. The word ‘Xavier’ symbolizes something bright.

97. Yael
Yael is a sweet-sounding traditional French religious baby name that denotes the strength of God.

98. Yves
Pronounced as EVE, Yves is a French-originated moniker that means Yew-wood.

100. Ziv
While looking for a short uncommon name, Ziv could be a good pick. It means light and happiness.

French names are not only melodious but also hold special meanings. Because of this distinctiveness, not just in France or French-speaking countries, you will find babies from all over the world having these names. Whether a first baby name, middle, or even last name, these names will unlock your prince’s true identity.