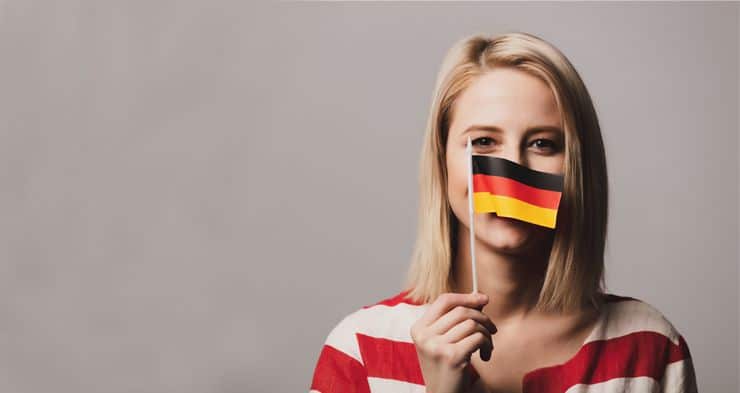 Today, there are so many German names famous in the English-speaking world. This list includes the most classic German baby girl names to the most unique and fashionable ones. Germany has a rich language and history. That is why so many German names are well-established internationally, especially in America and Europe. You will be surprised to know that the list of top 1000 names for girls in the US includes so many German words. It is mainly due to high national diversity among sports stars, celebrities, artists, etc. These personalities provided a significant influence on people and took these popular names for their baby girls.

If you are looking for a proper German name for your princess, you can find some in this article. We have listed down the top 100 German names for girls popular this year.

1. Ada
Ada is an original German word, and it symbolizes nobility or a noble person.

2. Adalgisa
This name has a German origin and means a noble weapon or contract.

3. Adali
This name means a nobleman.

4. Adele
The singer, Adele’s reputation, has added to its popularity; however, it is an old German name. It is the best choice of royalty-obsessed mothers, and it represents nobility in German.

5. Arabelle
This sweet name for girls means a beautiful eagle.

7. Baldhart
This name is best for mothers who see their daughters as strong and brave because it means robust and bold.

8. Berdine
This name has a beautiful meaning, and that is glorious.

9. Bertha
It means bright and intelligent.

10. Bertina
Alike Bertha, it also means the intelligent one.

11. Bluma
This sweet name for German girls means a bloom or flower.

13. Cara
This beautiful name signifies a song or melody.

14. Charlotte
Princess Charlotte is the reason behind this name’s popularity in the UK. However, its origin is the German language, and it signifies a free woman.

15. Cheryl
It is an ancient German name used as both first and last names. It means the dear one, beloved or darling.

18. Conradina
It is a traditional name meaning brave.

19. Dagomar
In German, this name means a glorious day.

21. Delmi
This name has a beautiful meaning, a noble protector.

22. Derica
It represents a beloved leader according to the German language.

24. Ella
This name is getting popular in Germany. Derived from the word Alia, Ella means all.

26. Emma
This name is getting a lot of fame in Italy, France, and the USA. Besides that, the meaning fits right to its widespread popularity. Emma means universal.

27. Eramana
It is another cute name for German baby girls meaning honorable.

29. Eryka
It is a mighty name for baby girls meaning ever-powerful. 30.Evony
It represents an archer in German.

31. Faiga
Yiddish is a language of Jewish people influenced by several German and Modern words. Faiga is a German transformation of the Yiddish name Faigel, which means a bird.

32. Fernanda
This one comes from traditional German origin, and it means adventurous.

35. Gerdie
It means shelter and security.

36. Greta
This name has a beautiful meaning, pearl, which is perfect for your little bundle of joy. It is a unique and older German name.

37. Grizelda
It is a traditional name for German baby girls, which means endless patience.

39. Guilaine
According to German dialect, Guilaine means a pleasant oath.

41. Hedda
It represents a vigorous battle maiden in the German language.

42. Heidi
Heidi Klum is a German celebrity who aided the popularity of this name. It means ‘of noble birth.’

43. Helga
This name symbolizes a pious person according to the German language.

45. Hildreth
It comes from German origin, meaning a battle counselor.

46. Huberta
It represents the intelligent one.

47. Hulda
Hulda means a beloved one.

48. Ida
It is a traditional name that means industrious.

49. Irma
This word has two meanings; the first is universal, just like Emma and the second one is the goddess of war.

50. Isobella
The name is a variation of the name Elizabeth from Spanish to German.

52. Johannah
It originates from a Hebrew word and has a religious source. Johannah means God is gracious.

53. Joslyn
It is the variant of the Old German word Jocelyn. Joslyn denotes a constituent of the German tribe.

54. Juliane
It is a Latin-derived word, and it means youthful.

55. Jutte
It comes from Hebrew, and it represents a woman from Judea.

56. Katja
This name derives from the English word Katherine, and it means pure.

57. Klara
It is the German name for Clara, and it means clear and bright.

58. Klarissa
It is the French variant of the Latin name Clara. Klarissa means clear and bright.

59. Kristin
This name means a Christian, and it belongs to the Norwegian and German languages.

60. Laurice
It has a Latin origin, meaning bay laurel.

61. Leni
It originates from Latin, meaning a woman of Magdala or light. It is a variant of Lena.

62. Lili
It represents a Lilly flower in the German language.

63. Lisbeth
It originates from Hebrew as a diminutive of Elizabeth and means pledged to God.

64. Louise
It is an older German name meaning famous warrior and spelled as Luise.

66. Luzie
It is a variant of Lucia, meaning light.

67. Magda
This name has a religious origin as it appears in the Bible as Mary Magdalene.

68. Mallory
This word has both German and French origin. In German, it signifies a war counselor and strategist, while in French, it means unlucky. It is a unisex name.

69. Maja
The name is a variant of Maya in Arabic, and it means splendid.

70. Maria
This name has been famous for several centuries, although it doesn’t have an attractive meaning. It means bitter, but the literal meaning of this name has never limited its popularity. In 2018, it was the third most popular name for girls worldwide.

72. Mathilda
This name has a strong meaning, mighty in battle. By origin, Mathilda is an older German word.

73. Melisande
This name has gained tremendous popularity in the USA within the last few years. It comes from the French dialect and symbolizes a robust working person.

75. Neele
Cornelia is the full form of this name in German, and it means horn.

77. Odiel
It has a Hebrew origin, and it means I will praise the Lord.

78. Raffaela
It has a Hebrew origin from the name Raphaela, and it means God heals.

79. Raymonda
It has a bold and robust meaning, wise protector.

80. Reta
It has a Greek origin, and it means shaken.

81. Rike
It is a feminine variant of the name Henry, and it means estate ruler.

82. Romantz
This name comes from the Latin word, and it means a Roman.

83. Rosalinde
This name came from a Latin word, and it means a pretty rose.

84. Senta
This name is a variant of the name Crescens of Roman origin. It means to grow.

85. Stephanine
The name is a variation of the Greek word Stephen, and it means crown.

86. Suse
It means a Lilly flower, and it comes from Hebrew origin.

87. Tahnia
It is a German variation of the Russian name Tatiana.

88. Thea
It means the gift of God, and it is the modern variation of an old Greek word.

89. Theresia
It is a German variation of the name Teresa in Spanish. It means to harvest.

91. Ulla
Originated from Scandinavian Ulla means determination and will.

92. Uta
This word has a German origin, and it means riches and prosperity.

93. Valda
It is a German name meaning battle heroine.

95. Wilda
It is the feminine version of the word wild, and it means to strive.

96. Wylda
It is a variation of the name Wilda, and it means to strive in German.

97. Yvaine
It is a Scottish name, meaning evening star.

98. Zilke
Zilke is the German variant of the name ‘Celia,’ and it means the blind one.

99. Ziska
Ziska is a Lain-originated word, and it means a free man.

Among the most famous German titles you see in the above list, some names share other languages’ origins. Since these popular names have a historical or religious background, Germans embraced them as pride from generation to generation. Some characters appear in the most popular novels, TV series, and movies. However, naming your child is not a task but a responsibility. Therefore, parents should always choose a meaningful, influential name.